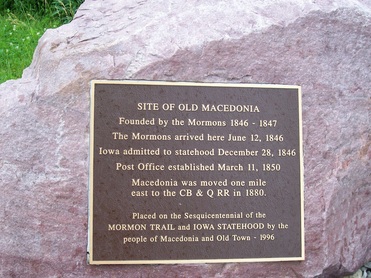 As the Mormons passed through the area, the fertility of the soil, the beauty of the landscape, the large groves of trees, and the rivers and pure streams were noted. The settlers ran into many adversities such as hostile Indians and powerful rivers. The Pottawattamie Indians had barely left the Territory of Iowa when the Mormon wave moved from Navoo, Illinois area known as the Black Hawk Purchase or the Territory of Iowa.

They blazed the “Mormon Trail” west, converging at Old Town and crossing the West Nishnabotna River at a limestone rock bottom trail crossing. That crossing later became the site of Old Macedonia. The Mormons continued west to the Grand Encampment on the east side of the Missouri River in Iowa and Winter Quarters in Nebraska.

The Pioneer Mormons gathered at the mill and held regular religious services. Elder Beebe was their first minister. His first sermon was taken from the New Testament, the Book of Acts, Chapter 16, Verse 9… “And a vision appeared to Paul in the night; There stood a man of Macedonia, and prayed him, saying, Come over in to Macedonia, and help us.” After this sermon, a petition was prepared and sent to Washington, D.C. asking for a post office to be established. The post office was established on the eleventh day of March, 1850 as a result of the petition and thereafter the Stutsman Mill settlement was called Macedonia. The post office was the second post office established in Pottawattamie County.

Levi Graybill camped along the Nishnabotna in 1847 near the future site of old Macedonia. On this land, he built the first log cabin in Macedonia Township and moved his family in. Graybill intended to build a mill, but his means were limited so he sold his claim to the mill site to Jonathan B. Stutsman. Thus the first mill was built.

During the early years old Macedonia gained somewhat in material importance although consisting of only a few scattered buildings on the banks of Nishnabotna. However, it became the principal trading point in eastern Pottawattamie County and was the commercial center of a fine and rich farming community as could be found in southwest Iowa. At this time farm produce had to be hauled fifteen or twenty miles and the need of a railroad became more apparent every year. The first steam locomotive invaded the quiet countryside east of old Macedonia on July 4, 1880. The date must be considered the starting point of new Macedonia.

With the railroad came new life, new business needs and impulses, emigration and new competition. The railroad, rather than the river, now became more important to the economy of the township and many of the residents and businesses in old Macedonia prepared to move east to the railroad.

Mr. Woodmancy, together with B.F. Clayton and T.J. Evans, organized a Macedonia Town Company for the purpose of surveying, platting, and selling lots for new town. Streets were staked out and named for the men most prominent in the formation of the new community.

The Town of Macedonia was incorporated in 1892. 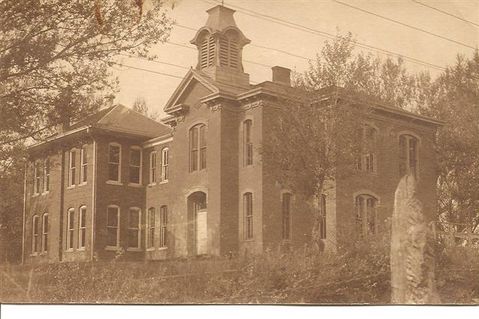 This picture was inside the cornerstone and time capsule at the Macedonia School building built in 1937.

The old Macedonia School was built in 1882 shortly after the CB&Q Railroad came through the "new" town of Macedonia.  New town was located one mile east of "old town" Macedonia which was originally by the Nishnabotna River.  The original part of the school consisted of four rooms and housed ten grades.  Approximately 1908 two rooms were added and grades increased to twelve.

When the district consolidated with the country districts surrounding the town in 1917, taking in 25 sections another building was necessary.  This was built at a cost of $20,000 and was used as a high school.

In 1937 the first building was tore down and a new $101,000 grade building and gymnasium were erected in connection with the 1917 high school building.

On Saturday April 9, 2011 volunteers removed the cornerstone and time capsule from the Macedonia building.


THE OLD WOODEN DONIA RAILROAD BRIDGE
Submitted By Ruby Bentley
September of 1977 marked the demise of the old wooden railroad bridge at the west end of Macedonia's Main Street. When the bridge was constructed, farmers and townsfolk "thanked their lucky stars" for it or they may have "cussed" it when they tried to drive cattle across it!
It took two years to make the cut through the hill on Main Street for the railroad. Horse and mule drawn scrapers moved the dirt up and down into wagons with loose plank framing to enable again, dumping the dirt to build the grade north and south of the cut in the hill. This was the deepest cut required when the railroad was built from Hastings to Avoca. The railroad followed a flat terrain until it was forced to make the sharp bend near Old Town Macedonia because of the limestone formation.
The bridge over the railroad tracks was completed on August 20, 1880.
Many memories were made "over and under" the old bridge. Kids played under it; some teens tried to light it on fire once! It was a great place to explore! You could put a penny on the iron rail and wait for the train to pass and smash the copper penny flat as a pancake! Stories are told of teenagers "riding the rails" late at night in their motor vehicles. The huge tresses, poles and beams of the railroad bridge were a monstrosity for those days!
The railroad transported lots of cattle to Chicago on the old CB&Q Railroad cattle cars. The cars gently rocked back and forth as the smell of fresh manure wafted across the countryside and farmsteads, and through the little towns.
Grain made its way by rail to the big elevators.
Many families and folks took the train to Hastings, Iowa, changed trains, and continued on to Council Bluffs to do their shopping and business. They were bundled for the cold travel or took their hand held fans in the heat of the summer as there was no air conditioning in the passenger cars other than the breeze made by the train's movement.
The CB&Q train rumbled right past the west end of Donia's Main Street! It was close enough to hear every arrival and departure as it steamed right past people going about their business in the town's hub! Donia must have been booming!
One paragraph in an 1880 issue of the Macedonia Tribune said, "If the train doesn't bring a load of coal soon, the townspeople are likely to freeze to death!"
It's been thirty-four years since the old bridge was demolished and the whole railroad era has just been a memory since then! Do you have a memory of the Donia or Carson railroad?